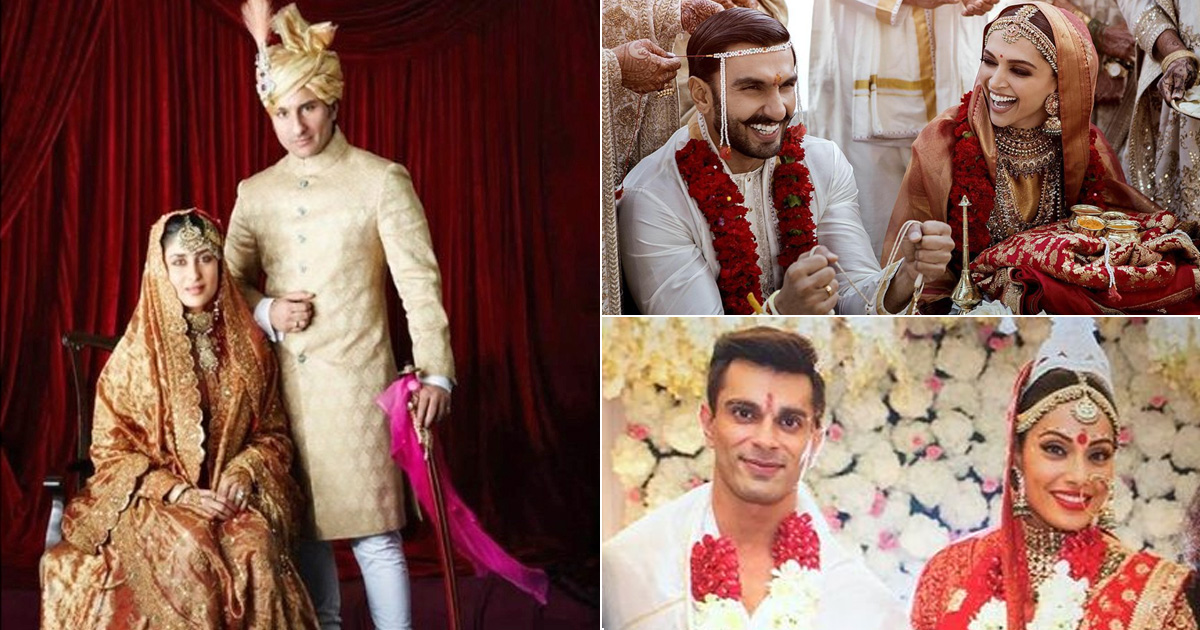 It’s normal to develop feelings for your co-workers, especially because you tend to spend hours together. And the same is true in the Bollywood film industry. After spending weeks and months together, sometimes while abroad, for film shoots, actors and actress develop feelings and begin dating each other.

While these relationships may not always survive the test of time, over a dozen have brought their love from the reel to real life. Not only did they date for years, they even walked down the aisle together and have kids too.

From Deepika Padukone -Ranveer Singh to Kareena Kapoor Khan-Saif Ali Khan and Genelia D’Souza -Riteish Deshmukh, here are 7 couples who tied the knot in real after falling in love on sets.

The Bollywood power couple never fails to make headlines because of their sweet PDA. From what we know, it was during the shooting of Sanjay Leela Bhansali’s Goliyon Ki Rasleela Ram-Leela that the duo allegedly fell in love. And we bet it is true for their chemistry in the film was sizzling. Post this film; the duo also featured alongside each other in Bajirao Mastani (2015) and Padmaavat (2018).

In November 2018, the couple married in traditional Konkani and Sindhi ceremonies at Lake Como, Italy. We are eager to know when they are planning gon extending their family though!

Kareena Kapoor had just broken up with Shahid Kapoor after being together for over four years, Soon after that, during the filming of her next release – Tashan, she met Saif Ali Khan, and they fell in love. In fact, the Nawab of Pataudi even got her name inked of his forearm.

After a five-year-long courtship, this Bollywood couple tied the knot on October 16, 2012. The couple welcomed their first kid Taimur, in 2016 and are not gearing for the birth of their second any day soon.

Miss World 1994, Aishwarya Rai and the Bachchan family heir, Abhishek Bachchan, starred in several films together and hence it’s not shocking that they fell in love too. While fans believe that love began blossoming between this Bollywood power couple post her shooting for Kajra Re in Bunty Aur Babli (2005), the duo spent a lot of time after that filming three projects together – Umrao Jaan, Guru and Dhoom 2. In fact, Abhishek proposed to his lady love during one promotional event of Guru, in Toronto.

While the couple for engaged on January 14, 2007, they exchanged vows on April 20 the same year. They had a traditional Hindu wedding as per the rite of the Bunt community and North Indian and Bengali ceremonies. In November 2011, the couple welcomed their daughter Aaradhya.

Genelia D’Souza and Riteish Deshmukh first met at a test shoot, but later started dating during the filming of their debut movie Tujhe Meri Kasam (2003). The duo, who have since then starred in several films together, exchanged vows nine years later on February 3, 2012. They had two weddings, first a traditional Marathi marriage ceremony and a Christian wedding in the church the next day.

The couple who recently celebrated their 9th wedding anniversary were blessed with their first child, Riaan in 2014 and a second son, Rahyl, in 2016.

As per reports, it was love at first sight for Kajol, when she first starred opposite Ajay Devgan in Hulchul. The duo started dating each other during the filming of Gundaraj in 1994. Five years later, when the actress was at the peak of her career, she married Ajay in a Maharashtrian ceremony and looked gorgeous on in green on the special day.

She recently revealed that her father was upset by the decision and even refused to talk to her for a week. The couple, who will be celebrating their 22nd anniversary on February 24, is parents to two kids Nysa (17) and Yug (10). The duo was recently seen together on the silver screen in Tanhaji, The Unsung Hero (2020).

The Bollywood couple is couple goals for even now years after marriage they still poke fun at each other as lovers do during the honeymoon stage of their relationship. Twinkle Khanna and Akshay Kumar met for the first time during a photo session for Filmfare magazine. Akki fell head over heels for the actress-turned-author they tied the knot on January 17, 2001.

The couple has been blessed with two kids, son Aarav and daughter Nitara.

In 2015, Bipasha Basu met Karan Singh Grover on the sets of Alone. The two who were still reeling in from recent loses in their love lives – KSG divorcing actress Jennifer Winget and Basu getting out of a 9 year-long relationship with John Abraham – found comfort and support with each other.

The two fell in love during the shooting and exchanged vows in Bengali ceremony on April 20, 2016. They will be celebrating their 5th anniversary this year.

Several other celebs also met and fell on love on the sets of films. These include Kunal Kemmu and Soha Ali Khan, Anushka Sharma and Virat Kohli, Amitabh Bachchan and Jaya Bachchan.

Which Bollywood couple’s on-screen chemistry did you love best? Let us know in the comments.

Must Read: Tiger 3: Salman Khan Is Rocking A Grey Stubble Like No One Before & This Might Be His Look For The Film!