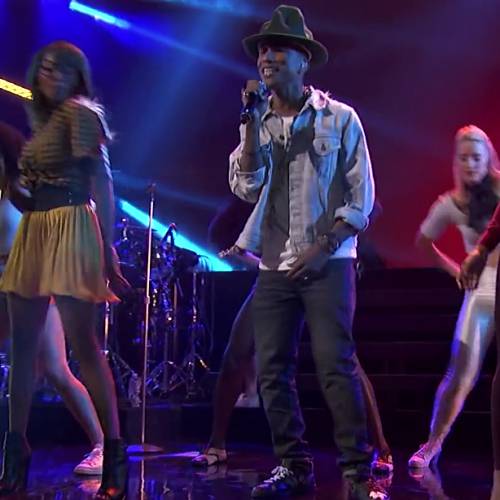 This Easter Monday (Monday 13 April) on BBC Radio 2, Scott Mills presents the Most Played Songs of the Decade (2-5pm), counting down the 40 most played songs broadcast on UK radio and tv since 2010. The programme can be obtainable on BBC Sounds.

Happy by Pharrell Williams tops the chart at No. 1, adopted by Adele’s Rolling In The Deep at No. 2 – making her one of solely two Brits in the Top 10 (alongside Mark Ronson) and the solely solo feminine artist in the Top 10 – with Moves Like Jagger by Maroon 5 that includes Christina Aguilera at No. 3.

Scott Mills says: “Every single tune we’ll play on this show is an absolute banger that you’ll have known and loved then learnt every word to over the past 10 years, and I’ll play the entire Top 40 in full. So get ready to collectively sing your heads off. I’ll certainly be doing just that, but thankfully off-mic.”

The chart, compiled by music licensing firm PPL, options some of music’s largest stars together with Adele, Ed Sheeran, Bruno Mars, Rihanna, Justin Timberlake and Katy Perry, however listeners can nonetheless count on some surprises alongside the manner. Made by impartial radio manufacturing firm Listen, PPL’s Most Played Charts are created from unique UK music utilization and airplay knowledge equipped by its licensees, together with radio stations and TV channels.

The Top 40 Most Played Songs additionally reveal attention-grabbing details and tendencies about the songs on our airwaves:

Two artists seem 3 times – Adele and Bruno Mars (twice solo, and as soon as extra with Mark Ronson)
Five artists seem twice – Justin Timberlake, Katy Perry, Kings of Leon, Maroon 5 and Pharrell (as soon as solo and as soon as with Daft Punk)
12 of the tracks are carried out by bands/teams
14 are sung by ladies; 22 by males; 4 have each female and male vocals
Seven tracks are collaborations
34 of the songs had been launched in the final decade; 5 had been launched in the noughties; and only one was launched in the 1990s (Natalie Imbruglia’s ‘Torn’ in 1997)
18 songs are primarily credited to American artists; 14 to British artists; three to Canadian artists (two of these by Bruno Mars); two to Australian artists (if counting Gotye as Australian); and one to a Barbadian (Rihanna)

Jeff Smith, Head of Music, Radio 2, says: “BBC Radio 2 plays the best of the best pop music, and our Most Played Chart of the last decade is packed with universally loved, singalong pop hits that really do stand the test of time. So do tune in to our unique Top 40 countdown on Radio 2 this Easter Monday!”

Peter Leathem, Chief Executive Officer at PPL, says: “PPL is delighted to offer the BBC with knowledge for this unbelievable chart of the decade. The prime 40 most played songs are the sounds that radio producers and broadcasters have persistently played all through the final decade and can evoke many recollections for all of us. Congratulations and thanks to all those that characteristic in our Most Played Songs of the 2010s Chart.”