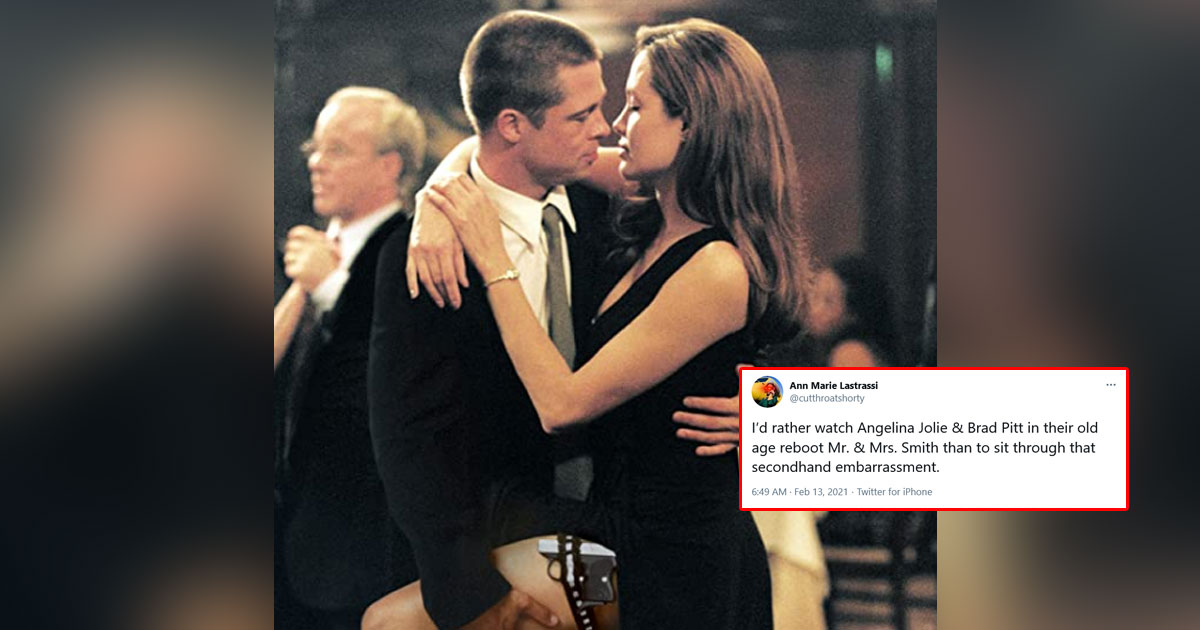 Earlier today, we woke up to good news that Amazon Prime Video is rebooting Angelina Jolie and Brad Pitt’s 2005 film Mr. & Mrs. Smith into a series that would star Phoebe Waller-Bridge and Donald Glover. But guess what, Twitter has a mixed reaction to this reboot news. Read to know the scoop below.

For those of you who don’t know, this is the very movie when Angelina and Brad started dating each other. They were so much in love with each other that couldn’t keep their hands off each other on the sets too.

Prime Video took to their official Twitter handle and shared, “@donaldglover + Phoebe Waller-Bridge = Mr. & Mrs. Smith But what does that really mean?? Drop your conspiracy theories below.”

But what does that really mean?? Drop your conspiracy theories below. pic.twitter.com/sWZXpWpYnM

The series, which is based on the 2005 hit New Regency film, is due in 2022. Glover and Waller-Bridge will star in, and executive produce the series. Keep reading further for all the details.

Now, Twitter has a mixed reaction to this news. A user tweeted, “I’d rather watch Angelina Jolie & Brad Pitt in their old age reboot Mr. & Mrs. Smith than to sit through that secondhand embarrassment.”

Take a look at some of the reactions here:

I’d rather watch Angelina Jolie & Brad Pitt in their old age reboot Mr. & Mrs. Smith than to sit through that secondhand embarrassment.

no one will ever live up to brad pitt and angelina jolie in mr & mrs smith https://t.co/VFqWZSOFJS

ok i really liked the idea of donald and pwb playing mr. & mrs. Smith but imagine if it was pwb and angelina jolie pic.twitter.com/PfALHYx4b9

I need no white women to ever do any of Angelina Jolie’s prior roles. None of y’all are built for it. Case closed.

Angelina jolie is trending. Thought something bad happened. But they are just rebooting mr and mrs smith into a tv series. Which you know is bad too but at least Angelina is ok! pic.twitter.com/Wr2LhBRkCl

Meanwhile, Donald Glover and Phoebe Waller-Bridge made the announcement via social media by posting a video to Instagram Stories with details of the project. Amazon Studios head Jennifer Salke also posted the news of the new show to her Twitter account on Friday.

“Talk about the dream team! Donald Glover and Phoebe Waller-Bridge are two of the most talented creators and performers in the world. It’s truly a dream for us, as it will be for our global audience, to have these two forces of nature collaborating as a powerhouse creative team,” Salke said in a statement.

“Mr. and Mrs. Smith’ is an iconic property, and we can’t wait to see how Donald, Phoebe and Francesca make it their own. We’re thrilled to be working with them, and with such great partners at New Regency.

What are your thoughts on Angelina Jolie and Brad Pitt’s Mr. & Mrs. Smith getting a reboot? Tell us in the comments below.