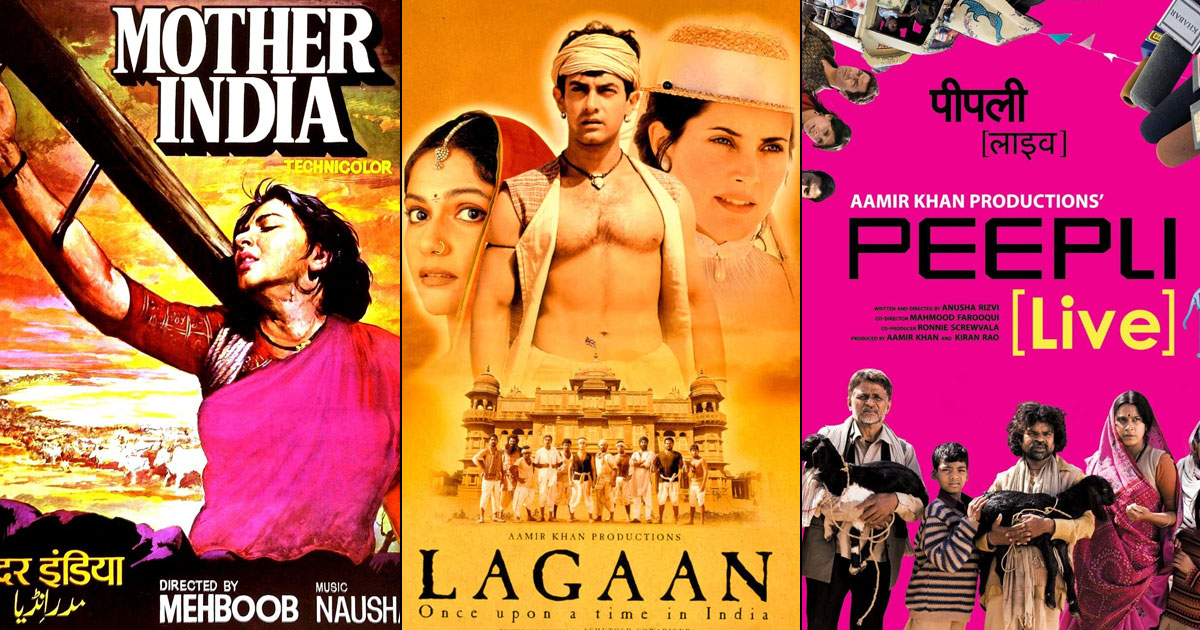 The farmer’s protest in India has been going on for months now. From a clash with the police force in Delhi to the suspension of internet services in certain areas – the dispute is getting uglier. Not only on ground zero but Twitter too has turned into a battleground for the same. From Kangana Ranaut to Diljit Dosanjh and now international celebs, everyone has something to say. But did you know, Bollywood movies have been talking about their problems for years now?

Bollywood may be taking sides with what is happening in the nation at the moment, but films talking about the hardships the ‘Anna Data’ (food providers) of the nation face have been made repeatedly. In fact, they have shown the harsh reality as accurate as they could earning not only national but international recognition too.

Today, as the plight of farmers in India is making the headlines –again, unfortunately – we bring you 5 Bollywood movies that spoke about the issues they faced. From farmer suicide to confiscation of land owing to the rising debts and more – check out our list below.

Starring Balraj Sahni and Nirupa Roy in the lead, this Bimal Roy directorial spoke about the problems a farmer and his family goes through when he is unable to repay a loan secured again his land. It also shed light on the unethical practices those in power follow to get what they want.

The Bollywood movie, followed by Shambu Mahato (Balraj), moved from his village to the city. In order to earn extra money to pay off a loan to the local zamindar, he and his son take up odd jobs but alas are unable to collect the desired amount. The film shows how, for their own profit, these landlords exploited farmers and even drove them away from the land.

This Bollywood movie won the All India Certificate of Merit for Best Feature Film, as well as the first Filmfare Best Movie Award. It is also the first Indian film to win the International Prize at the Cannes Film Festival. It also won the Social Progress Award at the Karlovy Vary International Film Festival.

Released in 1957, this Mehboob Khan directorial starred Nargis – in the titular role, along with Sunil Dutt, Rajendra Kumar, and Raaj Kumar. The film spoke about the setbacks an agro-based family faces when faced with natural calamities and how the survivors brave all odds to try and achieve their dreams. It also showed the atrocities of the local zamindars and the effect it has on the people.

The Bollywood movies followed Radha (Nargis) as she struggles to raise her two sons after being deserted by her disabled husband and suffering the loss of two children and mother-in-law. It showed how the injustice of the local moneylender took one child on the wrong path and a mother’s ultimate sacrifice to rights the wrongs.

This Bollywood movie, one of the most expensive films made in the Hindi film industry, has won numerous awards including the All India Certificate of Merit for Best Feature Film, the Filmfare Best Film Award 1957. It was also the first Indian film to receive an Oscar nomination. It was nominated for the Academy Award for Best International Feature Film that year.

Directed by Ashutosh Gowariker, this film starring Aamir Khan, Gracy Singh, Rachel Shelley, Paul Blackthorne and others spoke of the agricultural tax aka lagan placed upon the Indian farmers by the British. Despite the land being barren and the area devoid of rain for a long time, the rulers are merciless and expect the payments to be made irrespective.

This Bollywood movie followed Bhuvan Latha (Aamir) as he challenges the British to waiver the tax by beating them at cricket. From the music to the dance and dialogues and cinematography, the film takes you back in time and makes you root for the farmers to overcome all odds and win the match.

Lagaan received widespread critical acclaim and awards at national and international film festivals. It was the third Indian film to be nominated for the Academy Award for Best Foreign Language Film.

Directed by Puneet Sira, this Bollywood movie features Sohail Khan, Jackie Shroff, Sohail Khan, Arbaaz Khan, Dia Mirza and Nauheed Cyrusi’s role and focuses on farmers’ suicides in India. The film speaks about a farmer who educated one son as a lawyer while the other works with him on the field.

This Bollywood movie showed how the people, for their own greed, put pressure on people forcing them to suicide when they aren’t able to deal with life. It also shed light on farmers being wrongfully accused and jailed when they take a stand for their rights.

Written and directed by Anusha Rizvi, this 2010 Bollywood movie starred Omkar Das Manikpuri, Raghubir Yadav, Shalini Vatsa, Malaika Shenoy, Nawazuddin Siddiqui and Naseeruddin Shah in pivotal roles. It spoke about farmer suicide and is one of the best films in India dealing with this subject.

Peepli Live spoke about the plight of the poorest of the poor in India and how for some committing suicide is a measure to help their family by getting the loans taken waved off and receive compensation. Not only their issues, but the film also talks about how different people – from journalists to politicians and everyone in between, take advantage of their situation to reap benefits.

This Bollywood movie was India’s official entry for the 83rd Academy Awards Best Foreign Film category, but it didn’t receive a nomination.

What do you think of these Bollywood movies made on farmers and the plight they face? Let us know in the comments. Also, do share with us your views on the ongoing farmer protest in the country.