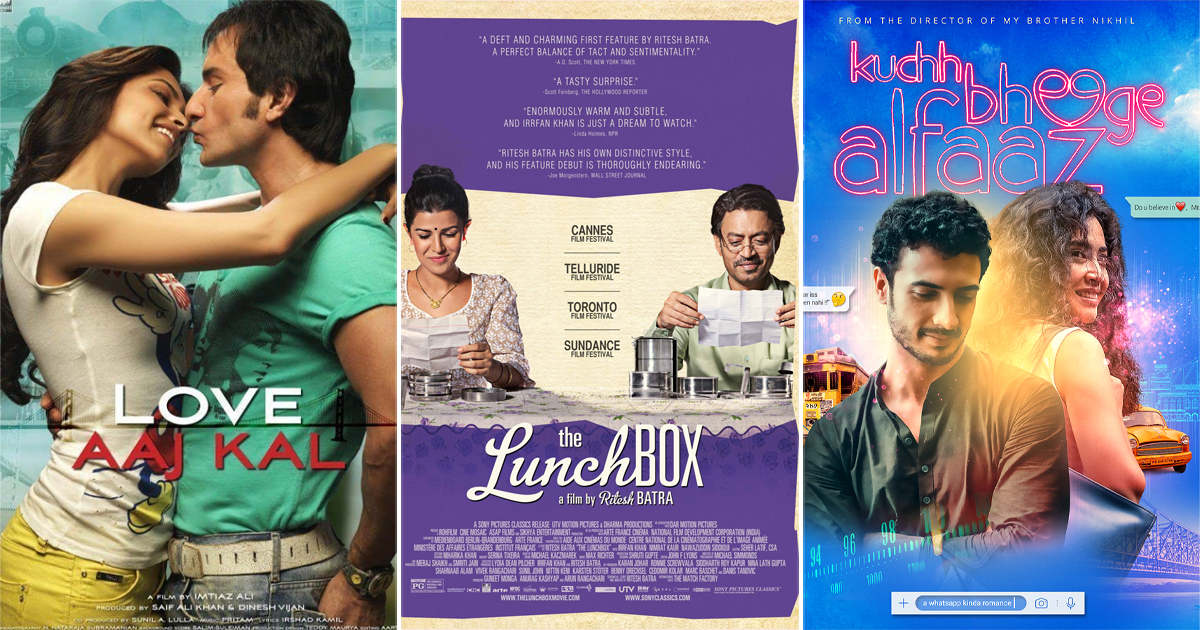 Modern filmmakers are beginning to look at love without rose tinted glasses and are delving deep into personality clashes, urban loneliness, politics and a lot more in their films. This Valentine’s Day, discover some of these refreshing perspectives with our pick of unusual love stories.

This Yoodlee Films production took a different route from the skin deep love we often see in cinema. Here, we find a leukodermic heroine, a brooding hero and an unlikely connection between them that goes beyond what can be seen on the surface. With poetic conversations woven into a sensitive story about two supposedly imperfect people who are perfect for each other, Onir’s ‘Kuch Bheege Alfaaz’ was a clear departure from cliched songs and dances. Through a series of digital screens that give us an insight into the hearts of two human-beings, we are slowly drawn into a story we have never seen or heard before.The digital age romance complete with questions about personal insecurities and the true meaning of love and life,  starred  Geetanjali Thapa and  Zain Khan Durrani in starring roles. And you must watch it this Valentine’s day.

At a time of hurried emojis and brief texts, this epistolary romance  written and directed by Ritesh Batra felt like a waft of fresh breeze.  Produced by Guneet Monga, Anurag Kashyap, and Arun Rangachari and many Indian and international studios, this story of urban loneliness and a serendipitous connection struck a chord worldwide and became an instant favourite on the festival circuit. Right from the first scene, we are absorbed into the life of  an introverted middle-aged man and the inner dialogue of an unhappy homemaker. Then arrives a misplaced tiffinbox and a door opens to hope,  happiness and possibly even a new life. With stunning performances by  Irrfan Khan, Nimrat Kaur and Nawazuddin Siddiqui , the film was screened at International Critics’ Week at the 2013 Cannes Film Festival, and  won the Critics Week Viewers Choice Award also known as Grand Rail d’Or. If subtlety is your gig give Lunchbox a chance this Valentine’s Day.

This 2009 film was Imtiaz Ali’s foray into a romance for the ages. Produced by Saif Ali Khan and Dinesh Vijan, the film compared the meaning of love and relationships across generations and took us on a journey across various emotions, geographies and phases of life to come full circle. The film was not a linear, boy meets girl romance but a coming- of -age story where the protagonists played by Saif and Deepika Padukone go through a circuitous route to find themselves before they can find each other.

Some dance and entertainment on Valentine’s day? This 2010 Yash Raj comedy  starring Ranveer Singh in his debut role and Anushka Sharma is still  enjoyable and fresh because of its contemporary, aspirational theme. Despite its title, the film was not about protagonists dreaming about getting married or falling in love. It was about two ambitious business partners who want to break into the lucrative world of high profile weddings and stumble their way through profit and loss to finally realise that they are made for each other.  The film was also the directorial debut of director Maneesh Sharma.

This Yoodlee Films production is a millennial love story about two aspiring comics.  Saqib Saleem and Shweta Basu Prasad play Deep and Zoya,  and their comedy sets are full of insights into their personal life and the world they live in. Soon, a communal subtext is read into an innocent joke and threatens  to overwhelm the comedy with even a news channel labelling the two as “anti national”. They are even slapped with charges of weaving a terror conspiracy, with hilarious consequences. This Nachiket Samant directorial is a good-natured take on urban living and the various problems couples go through, to make it to the big in an increasingly intolerant world and the place of love and art in it.

Tell us your plans for this Valentine’s Day in the comments section below. Also, tell us which film do you plan watching.