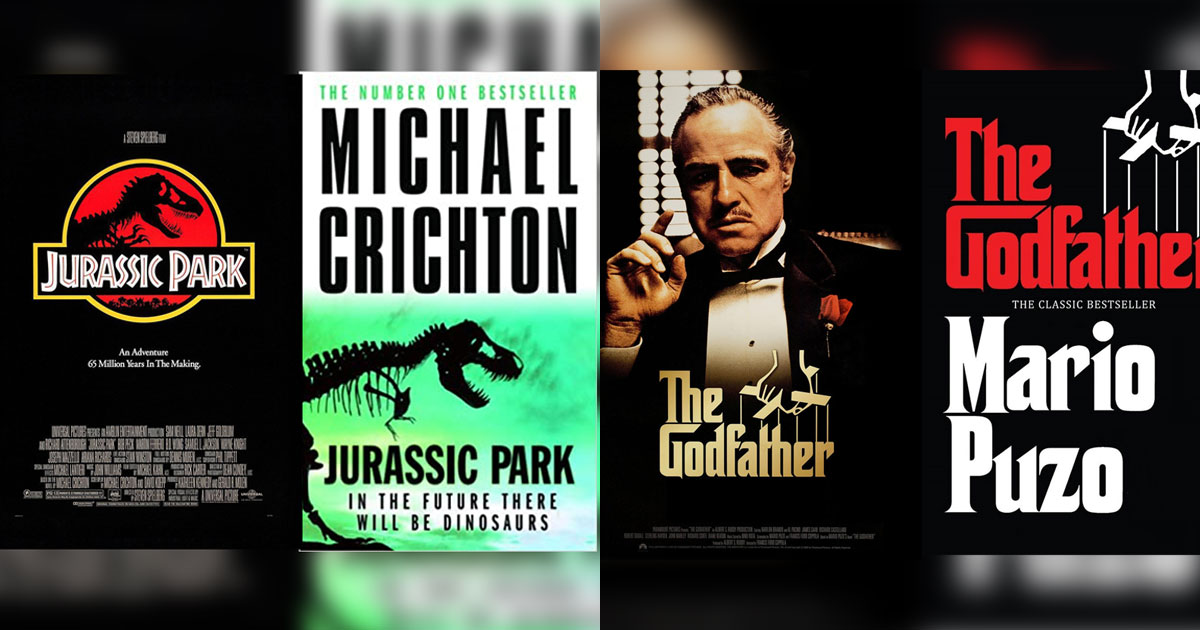 We all know that several Hollywood and Bollywood films are being adapted from novels. In fact, books like Paula Hawkins’ The Girl on the Train and John Green’s The Fault in Our Stars have been adapted in both cinemas. But did you know this not the trend only of the last decade?

A couple of Hollywood classics were adapted from content that written before it appeared on the silver screen. Adaptations can be tricky, but these film not only worked wonders, but they are still loved by many across the world. In fact, they were so good that we even forgot they were adapted from novels.

Today, check out these classic Hollywood film that you may be surprised to know were originally books. From The Godfather to Jurassic Park and Fight Club – here’s our pick of 5 movies we failed to remember were novel, to begin with.

The Godfather, a 1972 American crime film directed by Francis Ford Coppola, was adapted from Mario Puzo’s best-selling 1969 novel of the same name. Co-written by Puzo and Coppola, the film starred Marlon Brando, Al Pacino, James Caan, Richard Castellano and others.

The makers, Paramount Pictures, brought the right of the novel for its silver screen adaptation for $80,000 way before it gained popularity. The film didn’t paint the crime family as villains but showed them as people who weren’t just killers.

The following parts in the film franchise were also adapted from Mario’s novels of the same name.

Philip Dick’s Do Androids Dream Of Electric Sheep? is based in the future where androids are as real as humans. The book focuses on Rick Deckard’s life, a man who hunts them when they go rogue. And the 1982 adaptation by Ridley Scott was a visual masterpiece of the world created in the book.

Interest in making a film on the novel began soon after it hit the shelves in 1968, but it was only 14years later that it was finally released. The film starred Harrison Ford, Rutger Hauer, Sean Young, and Edward James Olmos in pivotal roles.

It’s still sinking in for me that this dinosaurs movie was actually adapted from a book. . Micheal Crichton’s Jurassic Park was the story of a theme park that re-creates living dinosaurs using genetics. Hell breaks loose when the park loses power, and the dinosaurs run loose while the crew and guests try to escape it.

Steven Spielberg follows the book to the T in the 1993 adaptation with beautiful cinematography and dinosaurs created with 20th century CGI. The film starred Sam Neill, Laura Dern, Jeff Goldblum, Richard Attenborough and others.

The sequel novel, The Lost World, was published in 1995 and was adapted on the silver screen in 1997. Subsequent films in the series are not based on the novels.

Chuck Palahniuk’s Fight Club is about a guy who is stuck in the motions of life while struggling with insomnia. This all changed when he becomes part of an underground fight club where people let out their aggressions on life.

And kudos to David Fincher for adapting the novel so well that we forget that it was originally a book. The intense acting by Brad Pitt, the visuals and the lengths the narrator goes through for the adaptation are mindblowing. The twist in it makes it even more enjoyable. Fox 2000 purchased the rights to Fight Club from Palahniuk for $10,000.

I am Legend – Richard Matheson’s I Am Legend

Richard Matheson’s I Am Legend is about the human survivor in the world. It follows his work experimenting on the people who have turned into vampire-like monsters due to an infection to find a cure. Francis Lawrence did an amazing job and made us forget it was a novel.

The film respects what the book covered but with its alternate ending that we all remember. The film starred Will Smith, Alice Braga, Charlie Tahan and more.

Which of these Hollywood movies did you know were novels earlier? Let us know in the comments.

Must Read: Shakira Birthday Special: From A $5.5 Million Home In Barcelona To A Private Plane & Island – 6 Expensive Investments Of The Singer