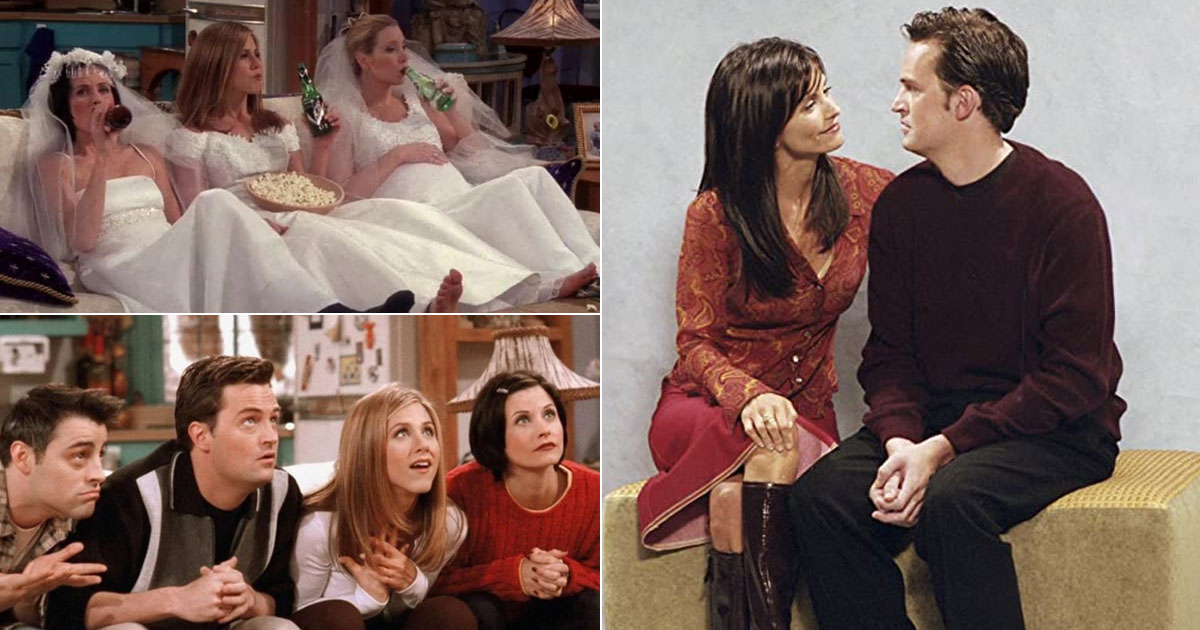 Just by mentioning FRIENDS, we are sure a smile has begun forming on that cute face of yours. Even if you are sad, depressed, suffering a breakup or just plain out bored at home, the episodes of this much-loved ’90s sitcom can lift your mood – almost instantly, or at least make you forget your problems for a couple of minutes that could turn into hours.

While almost every FRIENDS episode can get you chuckling and rolling on the floor with laughter, we at Koimoi, bring you our 5 favourite ones. These are sure to cheer you up as soon as you begin watching them. So scroll down and be ready to experience your frown turning into a smile.

The One with George Stephanopoulos – Season 1, Episode 4

This episode saw Joey and Chandler take Ross to a hockey game to divert his mind from Carol as that day marked the anniversary of him first sleeping with her. While the boys were ‘trying’ to have a positive time, the girls were the exact opposite. Starting with Rachel, female friends were depressed when they realize they had no plan in life. But the way their night in takes a turn for the goodwill makes your life better too!

The One Where No One’s Ready – Season 3, Episode 2

This episode had so much going on, that every second of it is sure to make you laugh and leave your problems behind. While Ross is under tremendous stress to get his friends ready for a black-tie event at the museum, Joey and Chandler get into a clash over Monica’s armrest chair. Exalting the matter further is Joey going to his flat and wearing almost all Chandler’s making Ross red with frustration. His troubles are sure to make yours go away.

The One With the Embryos – Season 4, Episode 12

While this episode saw Pheobe getting her uterus examined to become the mother of her half brother’s kids, it also showed the others enjoy (well not everyone) seemingly harmless game implantation of Jeopardy. This ‘Rachel and Monica vs. Chandler and Joey’ game, we saw the four answer questions about each other to see who knows the other better and get the keys to Monica’s apartment. We all had a hearty laugh when Rachel jumped up and down, yelling, “He’s a Transponster” when asked what Chandler does.

The One with All the Wedding Dresses – Season 4, Episode 20

Ross is all set to walk down the aisle with Emily and the bride’s wedding dress is in Monica’s flat. After being tempted a lot, she tries the dress tries on Emily’s wedding dress and then just doesn’t want to take it off. While a pregnant Pheobe joins in on her own, the duo convinces Rachel to do the same to lift her mood. Also showing Rachel’s attempts to talk Joshua into marriage and Chandler take Joey to a sleep clinic, there is no chance you will be sad after seeing this FRIENDS episode.

The One with the Engagement Picture – Season 7, Episode 5

Monica and Chandler are all set to take their vows, and the Geller matriarch wants a pic of the couple to put in the papers leading to one of Chandler’s hilarious moments. While he has great difficulty smiling in front of the camera, we can’t help but laugh our hearts out. The episode also is fun as we see Joey teache Tag how to pick up women.

Some of our other favourite FRIENDS episodes to make us forget our worries and cheer us up are ‘The One With the Rumor’ that has a special appearance by Brad Pitt, ‘The One Where Ross Got High’ and obviously the first episode where we are introduced the six besties.

Which is your favourite FRIENDS’ episode to go to for some cheering? Let us know in the comments.