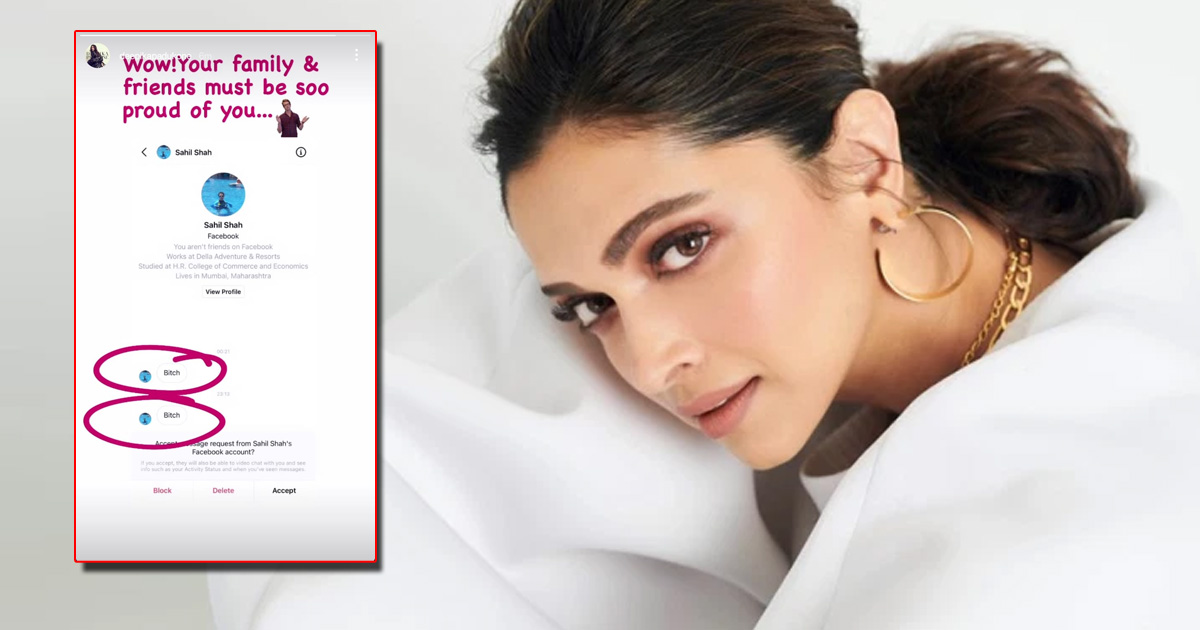 Celebrities often get trolled on social media for no reason. A user on Instagram sent a direct message to actress Deepika Padukone calling her a ‘b*tch’ and the actress’ savage reply to the troll is winning hearts on the internet. Read to know the scoop below.

Deepika usually doesn’t give any heed to the trolls but this time she decided to give it back like a queen.

An Instagram user called her ‘B*tch’ through a direct message and sharing the screenshot of the same on the story, Deepika Padukone wrote, “Wow! Your family and friends must be soo proud of you”. Take a look:

Meanwhile, as per Filmfare, Dhoom 4 makers are considering a female villain and Deepika Padukone is being considered for it. The report also suggests that the leggy beauty is keen on doing the film, she will have to sort her dates before signing it.

Well, considering her lineup of back-to-back films we must say the challenge of sorting dates will be bigger than that of doing action scenes in the film. What do you think?

Deepika Padukone who was last seen in Chhapaak last year has ’83 & Shakun Batra’s next lined up for release. Apart from that she also has a big film with Prabhas, Fighter with Hrithik Roshan & The Intern Remake. DP is also being considered for modern Bollywood versions of Mahabharata & Ramayana.

Meanwhile, Dhoom is one of the biggest franchises in Bollywood history. The first part of the film starring John Abraham, Abhishek Bachchan, Uday Chopra, Rimi Sen & Esha Deol released in 2004 and was a huge commercial success. A sequel followed in 2006 and it had Hrithik Roshan & Aishwarya Rai in lead along with Junior Bachchan, Uday, Bipasha Basu. With a business of 81 crores, the film proved to be the highest grosser of that year. Dhoom 3 did a business of 280.25 crores proving to be the highest grosser of that year.

What do y’all think Deepika Padukone’s savage reply to the troll? Tell us in the comments below.

Must Read: OM: The Battle Within: Check Out The Grand Set Of This Aditya Roy Kapur, Sanjana Sanghi Actioner