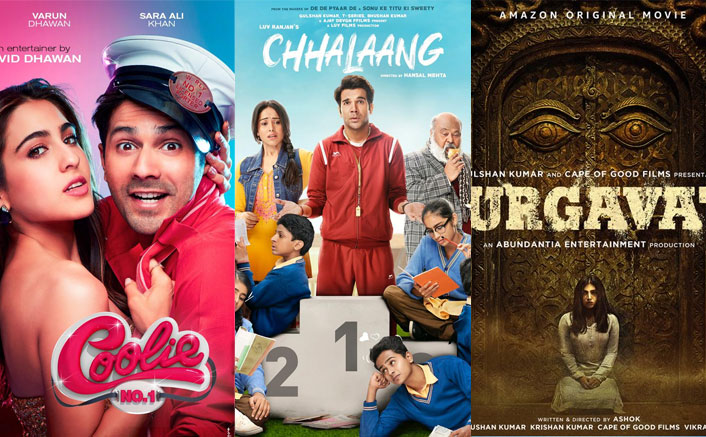 Despite cinemas gearing as much as open on October 15 throughout India, a brand new set of hyped movies have been confirmed for OTT launch over the subsequent months. On Friday, Amazon Prime Video introduced a slate of 9 movies spanning 5 Indian languages that can premiere straight on the streaming service together with Coolie No. 1, Durgavati and Chhalaang.

These embrace the Varun Dhawan and Sara Ali Khan-starrer “Coolie No. 1”, the Rajkummar Rao-starrer “Chhalaang”, and “Durgavati” that includes Bhumi Pednekar.

Sara Ali Khan and Varun Dhawan’s Coolie No. 1 will launch on Christmas (December 25), whereas the Bhumi-starrer “Durgavati” will premiere on December 11.

“Our previous direct-to-service launches were watched in over 180 countries. We are buoyed by the tremendous response we received and are excited to up the ante with another 9 eagerly-awaited direct-to-service premieres, spanning 5 languages, to entertain our customers through this festive season,” stated Vijay Subramaniam of the streaming platform.

To this, the platform’s Gaurav Gandhi added: “The fact that more than 50 per cent of viewership of our Tamil, Telugu, Kannada, Malayalam Direct to Digital titles came from outside of the respective home states is representative of how digital distribution can expand the audience for great content. We are super excited to present our new slate and are confident that it will delight our customers in India and around the world.”

Share your ideas on the identical within the feedback part under? Also, inform us which movie are you probably the most enthusiastic about?

Must Read: Laxmmi Bomb: Akshay Kumar Builds Up An Excitement For Trailer Release With A New look