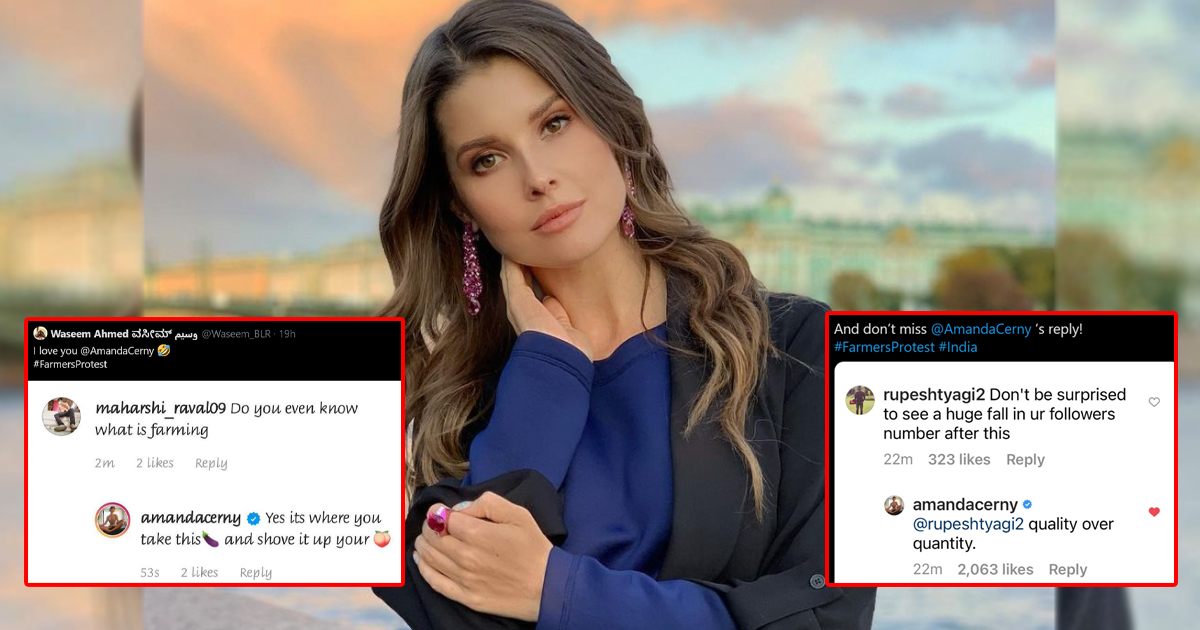 American vlogger Amanda Cerny is on a roll and how. The 29-year-old shared a picture of Sikh women standing in solidarity amid the farmers’ protest and penned a heartfelt note with the same. Soon after the post went viral, netizens started slamming her for losing her followers and guess what? The vlogger gave a kick-a** reply to the troll.

Amanda is someone who doesn’t believe in tolerating sh*t from the trolls and have always given savage replies to them.

Amanda Cerny took to Instagram to share the picture along with a caption that read, “The world is watching. You don’t have to be Indian or Punjabi or South Asian to understand the issue. All you have to do is care about humanity. Always demand freedom of speech, freedom of press, basic human and civil rights-equity and dignity for workers. ❤️ #FarmersProtest #internetshutdown”.

Now, this became viral in no time and one user commented, “Don’t be surprised to see a huge fall in ur followers numbers after this”. Amanda in no time replied, “quality over quantity”. Take a look:

Another user commented, “Do you even know is farming” to which Amanda Cerny replied, “yes it where you take this 🍆 and shove it up your 🍑”. Take a look:

A user commented taking a jibe at Indian artists and wrote, “Our Indian artists are too scared of the government to post this, hats off Amanda Cerny 💪🏻👏🏻”. Replying to the user, Amanda Cerny wrote, “I know. I’ve spoken with many people and understand they don’t want to hurt their business by speaking their mind. Careers can be ended as it’s all so ‘political’. But I think there is more value in self-sacrifice to allow for a voice to others that are being silenced. It can initially suck but at the end of it all, you live with real purpose if you aim to do what’s right with zero self interest”.

What are your thoughts on Amanda Cerny’s brutal replies to the trolls? Tell us in the comments below.