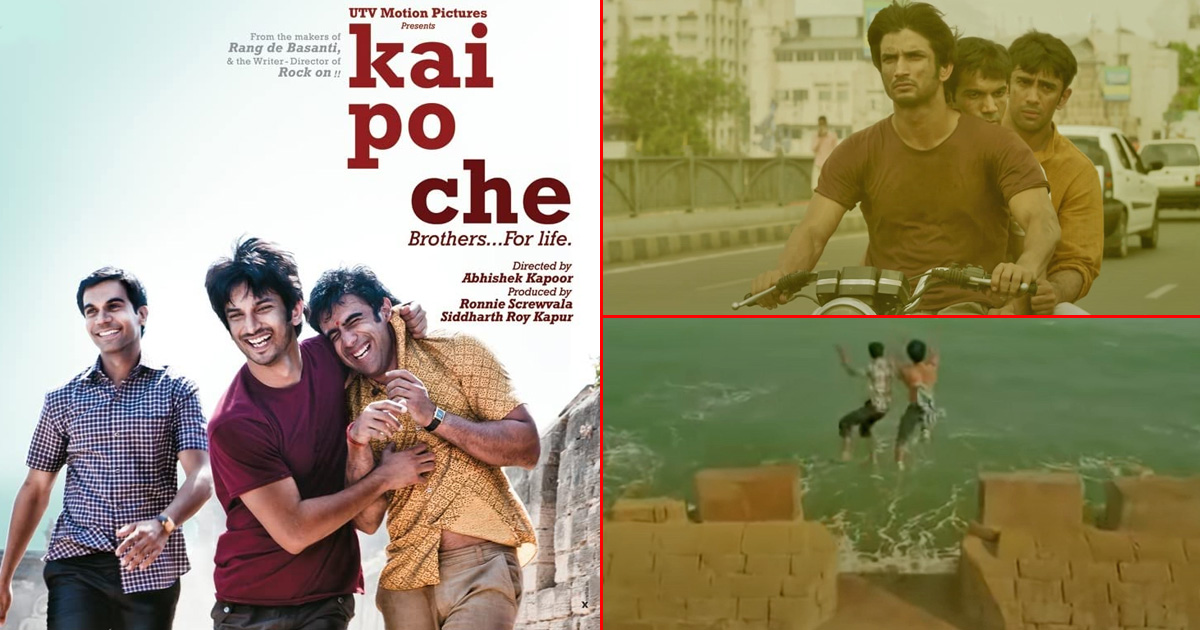 Kai Po Che is a very special film for I think most of us, not only coz it was Sushant Singh Rajput’s debut movie but also coz it taught us many life lessons which are still etched in our minds. Be it the songs, the fresh actors like SSR, Rajkumar Rao and Amit Sadh, everything turned out to be magical and just hit the right chords of our soul. Today as we celebrate 8 years of this amazing film, here are some of the best scenes from the movie, which has the capacity to still make your eyes numb.

Fasten your seatbelts as I am going to take you all on a nostalgic ride. Warning: You may want to watch this movie again after reading this article today!

THE JUMPING IN THE SEA SCENE

This scene from Kai Po Che, hands down is one of my most favourite scenes. The way Sushant Singh Rajput pushes Rajkumar Rao to jump from that height into the sea with him, the way Amit Sadh adds a comic touch and the dialogue ‘tere sikko ke chan chan se mere hawa ki keemat kam ho rahi hai’ adds so much weight. Also, not to forget, the song Meethi Boliyaan which is still a part of my playlist still does wonder.

This scene will trigger your emotions to an altogether different level. It really is painful to watch a scene where Sushant is dying. If you are an emotional person like me, then this scene from Kai Po Che is going to hit you differently. But I must admit that Amit Sadh and SSR have done a brilliant job in bringing this scene to reality.

Another very emotional scene from Kai Po Che. We all experienced this massive Gujarat 2001 earthquake on news channels or some might have even experienced it for real. But in the movie, this is yet another emotional scene. The way Rajkumar Rao’s character rushes to his new shop after the earthquake only to see it completely broken down into nothing and the way he breaks down is a brilliant performance, I must say. But, his two friends immediately come to his rescue, and they have his back. That was the beauty of their bond.

THE CLIMAX WITH ALI’S BATTING

Kai Po Che’s climax scene is where Amit Sadh comes back after serving a jail sentence for accidentally killing SSR. Rajkumar Rao brings him to the same place where these three friends wanted to open their sports shop and introduced Amit to his son. Ali, the boy whom SSR was coaching, has become an Indian batsman now, and the movie ends with him hitting a boundary and Sushant smiling from heaven.