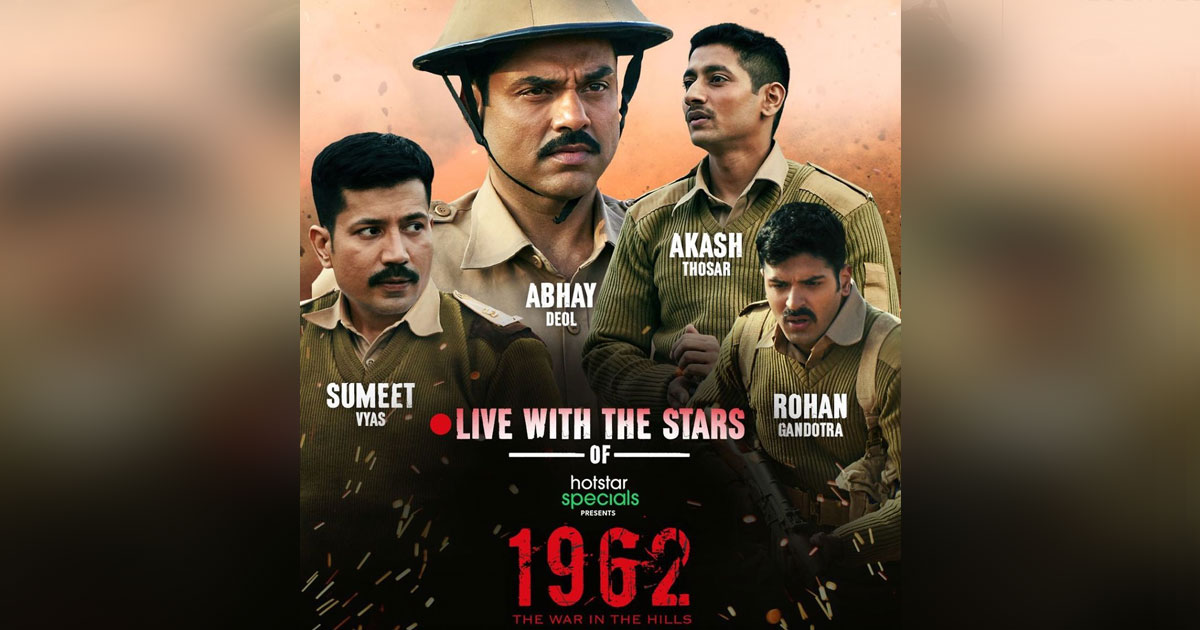 The war genre in the Hindi arena has seen a drastic evolution ever since I remember my first experience with Border (1997). It is not just about the men in uniform dying for the country on the battlefield anymore, but also what happens behind it too. War away from the war is a subplot that deserved to be explored and following the footprints of BBC’s World On Fire, Mahesh Manjrekar’s ambitious 1962: The War In The Hills manages to capture the emotions. But at the same time, when the shows on defence troops, including The Family Man or Kaafir, have shown us the best of it, are we ready to settle down for something less than or in between that? Let’s find out.

Inspired by a story from the 1962 Indo-China war (and as told by makers only inspired and not completely based), the Disney Plus Hotstar show traces an army troop, ‘C Company’ led by Abhay Deol, who is hell-bent on saving the country. The tension between India and China increases, and China trespasses the Indian lands to acquire them, thus begins a war. The show is also about what goes on in the families of these soldiers and their personal lives.

The fact that writer Charudutt Acharya and director Mahesh Manjrekar shift their gaze from the battlefield and set it on the families, or let’s call it a war away from war, becomes the high point of the show. Amid the chest-thumping, there are raw emotions too. In my opinion, 1962 somewhere rectifies a mistake that Akshay Kumar’s Kesari did. It gives its soldiers some concrete backstories and not just for the sake of a layer. But that is also ruined with too much of soap opera treatment. More about that later.

If you are aware of Mahesh Manjrekar the director, the man has the ability to bring emotions to already serious writing with his direction. In the show, he manages to capture the same. While the tension in the government, on the border, hardships of the army men, do make a significant part of the premise, he gives a big chunk to the families too. There is not just blink and miss mention of a waiting wife, longing girlfriend, or a sad mother but their stories too. Writer Acharya also manages to create a love triangle and an impressive one amid this and succeeds too.

The acting department in 1962: The War In The Hills is capable of lifting up the show. I have my own share of problems, but that doesn’t mean the performances are bad. Akash Thosar (whose detailing deserved more attention) gets the most pulling part in Kishan. And the actor manages to bring shades as per his capabilities. Rohan Gandotra becomes the third wheel in his triangle and is impressive too. But all credits to Hemal Ingle who plays Radha and immediately draws our attention to their story with her stubbornness and dreaming eyes. There is a sense of old-world charm to her face, her hair, and her emotions but also with a touch of modernity. A character I liked the most.

Abhay Deol does the job right but has nothing new to offer. Mahie Gill, as his wife, is impressive and manages to bring depth to their dynamic. Pooja Sawant here deserves mention for her break down scene.

Cinematographer Karan Rawat who is ditched by the village’s production design makes Ladakh his actual playground. He does or at least tries to capture God’s land like Mani Ratnam and Santosh Sivan did in Dil Se. There is symmetry he craves for and you can see that when he puts a vertical mountain as a backdrop and gives it a centre, or when he uses the discipline of the soldiers to create frames. But he doesn’t get to do that often, just a few glimpses.

The show is blessed with some nice songs, but there is also too much of it. Doori is a nice track though

First and foremost the dialect. In the show earlier we are told that the regiment belongs to Revadi in Haryana, and we are taken there. A person, even with the least knowledge of the state, can tell you how not a Haryana vibe the set design and costume gives. Manjrekar, who has roped in most Marathi stars, no problem in that as all are seasoned and calibre actors, forgets to train them for their dialects. Akash Thosar, who gives an earnest performance in terms of acting when he mouths his lines, sounds like that boy from Sairat speaking in forced Hindi. You can imagine!

On top of that, my biggest concern here is WHY ON EARTH ARE CHINESE TALKING IN HINDI WITH ENGLISH ACCENT? Some even in ‘Shudh’ Hindi just so you know. Bong Joon-Ho in his Oscar-winning speech gave the world a line that needs to be embossed in our minds. Follow those content creators, take an effort of introducing subtitles and use the original language. Authenticity is what we call it.

A lot of money has gone into making this show, but a bit more research could have managed to give some extra depth and authenticity in terms of production design and costume. At some places, it looked like Gokuldham to me, with no connect in terms of the appearance of the people living in the same village. And also it’s 1962, don’t tell me to imagine that is normal.

That brings me to a problem that needs to be solved soon. Why not name the people if you create their lookalikes? A hyperventilating then PM Jawaharlal Nehru look-alike is shown helpless and crying but never named, why? But at the same time, we do name then defence minister Krishna Menon. Probably a safe way to walk through offence brigade and controversy?

While the emotions are high and some characters impressive, there are also daily soap opera factors that are a big turn off. Shows like Kaafir, films like Raazi and more have taught us how not to dehumanise the enemy just to show you more righteous and 1962: The War In The Hills just does the opposite. Isn’t that instigating more hate?

In a bizarre decision, Manjrekar also decides to paint the war ground and home in two different shades, which breaks the connection and is more like two films in one. And why do we need a Nani Ma to tell the stories of the times? Can’t it be just the story? Just like Kalank, I didn’t see any purpose in that subplot.

While the team went to add some good, they instantly balanced it with something terrible, and that made it a mess. High emotions briskly moving to the daily soap opera zone don’t work. But it isn’t that everything’s bad. But we do have better options. 1962: The War In The Hills can be missed.

Must Read: WandaVision Review: While Everyone Was Waiting For Post-Credits, Marvel Surprises With Pre-Credits Worth 2 Episodes!